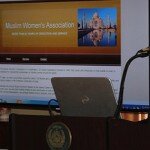 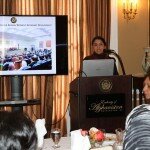 Ms. Nilofar Sakhi discusses her work with the ICAWED. 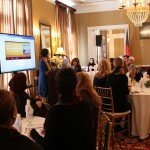 The Embassy of Afghanistan open its doors for the November MWA luncheon on November 20, 2013. Afghan women’s rights activists Ms. Fowzia Etimadi and Ms. Nilofar Sakhi spoke to guests about the situation in Afghanistan and the immense gains women have made over the last decade.

In addition to speaking about her work in Afghan civil society on behalf of women, Ms. Etimadi explored the role of women in Islam and in Afghan culture. She made the point that women as mothers, sisters, daughters and wives can influence the thinking in the home and encourage the male to denounce violence but education is critical. A lack of education, especially in rural areas, remains a challenge, but has improved over time.

To continue on with the theme of education, Ms. Sakhi also spoke to the luncheon attendees about her exciting and important work at the International Center for Afghan Women’s Economic Development (ICAWED) where she is Executive Director. The ICAWED is a pioneering institution associated with the American University of Afghanistan dedicated to advancing the role of women in Afghanistan’s economy.

The center will function as a headquarters to incubate female-led small and medium-sized businesses, provide business training to female entrepreneurs, funnel investment capital to promising women-run businesses, and provide women access to all the business and information technology (IT) assets at the American University of Afghanistan.

As a permanent, state-of-the-art facility dedicated to women’s economic empowerment, the center will function as a national hub coordinating and connecting both public and private sector entities that share the goal of fully integrating women into the Afghan economy.